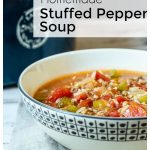 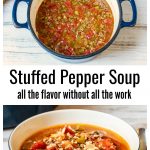 Try this delicious and hearty stuffed pepper soup recipe. It has all of the great flavor of stuffed peppers without all the extra work.

This stuffed pepper soup recipe is very similar to my stuffed cabbage soup. You are getting all the flavor of the original dish, however, you don't have to work nearly as hard. Stuffing peppers is not nearly as difficult as making stuffed cabbage but it still makes a great soup and it's quick and easy.

Basically you are browning ground beef and onions in a large pot. Then you add in tomatoes, chopped peppers, and broth. Bring it to a boil and add in your rice, then simmer until it's done.

It's one of those easy meals that can sit on the stove for a while. Let everyone go help themselves to a bowl or serve it family-style around the table.

And, like most soup recipes it freezes pretty well too.

It's one of the those hearty, warm and cozy dishes that works so well during the cold weather months. However, it is also so tasty you just might not care what time of year it is.