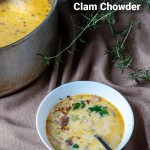 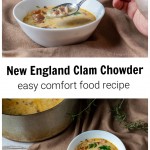 This classic New England Clam Chowder is made without any thickeners so it has all the flavors in a less heavy form. You might say it tastes more like a soup.

Warm and comforting, any soup that's homemade is especially good during the winter. Still, I'd also say that a good soup recipe is tasty any time of year. I made this New England style clam chowder and it was just the ticket for a cold winter day.

Like most chowders the bacon is key. It gives the soup a nice smoky taste. However, you don't have to use bacon grease for the fat as I did. You can cook the bacon separately and use olive oil or butter instead.

Potatoes are another ingredient typically found in chowder recipes. You can use any kind of potato. I like to use red potatoes because they are a little waxy and hold up in the soup. Other potatoes such as russets are softer and will break down quickly. However, if you like that texture there's no reason you can't use whatever you have in the pantry.

How to Thicken this Soup

There's cream in this recipe. However, this particular dish is not thick like most chowders. It's more of a soup in texture. Here are some ways to make it thicker.

I used 4 small cans of chopped clams in this recipe and I think I could have used more. You can also use whole clams or a mix of both. Of course, you could use less as well if you aren't a huge clam lover.

Lastly, this recipe calls for some hot paprika. I like to add in a little heat when making a rich creamy dish for balance. However, you could substitute cayenne or pepper flakes, or regular paprika. Alternatively, you could leave it out completely.

All in all, it was really good. Warm, creamy, flavorful, and a little spicy. Just the way we like it. 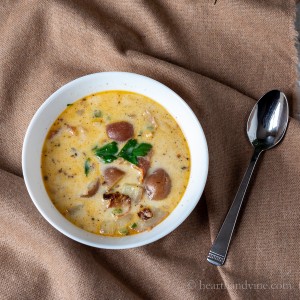 This classic New England Clam Chowder is made without any thickeners so it has all the flavors in a less heavy form. You might say it tastes more like a soup.
4.34 from 9 votes
Print Recipe Pin Recipe
Prep Time 10 mins
Cook Time 40 mins
Total Time 50 mins
Course Soups and Stews
Cuisine American
Servings 6
Calories 369 kcal

This is more of a soup than a traditional chowder in terms of consistency. Feel free to add thickeners such as roux or cornstarch if desired.