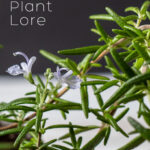 It's Christmas Eve and I'm busy preparing to enjoy the evening with my family. So here's a classic post all about Christmas plant lore. I hope you enjoy it and I'll be back with all new projects, recipes, and tips next week.

As you may know, a “legend,” according to Webster’s dictionary, is “a story from the past that is believed by many people but cannot be proved to be true.” It is no surprise that many legends have been told about Christmas. Some very special stories have been handed down through the years about plants and their association with the birth of Christ.

One of the most revered plants often thought of as “The Christmas Herb,” is rosemary. The symbol of remembrance, rosemary is a native plant to the Holy Land, where it grows in very large hedges. One legend says that the rosemary plant grows to a height of six feet in 33 years, the height and life of Christ. Another tells of the Holy family and their flight to Egypt. The family stopped to rest by a stream, next to a large, white, and flowering rosemary bush. Joseph placed Mary’s blue cloak across the bush. When Mary awoke, she washed the baby’s clothes in the stream and laid them to dry across the aromatic rosemary. Once the clothes were dry and had been removed, the white flowers had forever changed to the soft blue of Mary’s cloak.

Many herbs honor the Christmas season as their time to flower. Some believe that rosemary blooms on January 6, the Epiphany, when Jesus was presented to the Three Wise Men. Helleborus niger, commonly called the Christmas Rose, blooms only at Christmastime in Central Europe, during the depths of winter. The Christmas Cactus, which also blooms during the season, is commonly used as a Christmas Tree in hot climates.

In Mexico, the legend of the Poinsettia states that a poor girl was on her way to Christmas Eve mass. She had nothing to bring to baby Jesus. So, she picked some weeds along the side of the road. When she arrived at the church, the plants had burst into beautiful, star-like red blooms.

Evergreen plants are also commonly associated with Christmas. The most obvious is the Christmas Tree itself, which dates back to 15th century Germany. Their ability to survive in the coldest of regions has made them a symbol of immortality in many cultures. Holly, a legend says, sprang from the footprints of Christ as he walked the earth. In addition, the sharp leaves symbolize Jesus's thorny crown and the red berries his blood. The juniper was said to be one of the friendly plants that the Holy Family met on the long road from Bethlehem to Egypt. With Herod’s soldiers close behind, Joseph was looking for a safe place to hide his family, when a large juniper opened its branches and beckoned them inside to soft, fragrant safety.

These and many other legends of Christmas plant lore have been passed on from generation to generation. They remind us of the meaning of Christmas and help us share in the history of people who have celebrated this special holiday over the years.