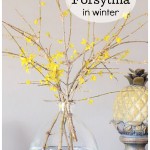 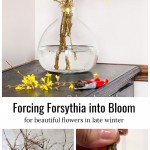 Learn about forcing forsythia and other flowering branches indoors. This is a great way to bring in some garden beauty during the late winter months.

The winter here in Pennsylvania can drag on and on. Some people joke and say we have four seasons; almost winter, winter, still winter, and summer. While that's obviously not true, our spring and fall do seem to fly by, and in the winter, garden lovers like me can't wait for spring. One thing I like to do that helps is to forcing forsythia branches to blooms so that I can have some cheery yellow blossoms inside, while there is still snow outside.

Where I live many people have forsythia bushes, and they are aggressive hardy growers, so cutting a few branches never hurts.

All you do is trim branches to the desired length. I like to have varying sizes, but all are pretty large around 2 to 4 feet.

Prepare a vase with lukewarm water, and a teaspoon of bleach.

Next, re-cut the stems by cutting into the bottom, about one inch for better water absorption. Some people actually prefer smashing the stems with a hammer.

Arrange the branches in the vase, and place them in a spot that is not too warm. A place where there is a decent amount of light but not direct sunlight.

Change the water every few days or once a week just like you would any cut flower.

After about a week they are starting to bloom! Nothing screams spring like forsythia blooms.

Other Flowering Trees and Shrubs to Try Forcing Indoors

Note forsythia is probably the easiest to force and the quickest. However, can force other branches but they may take a few extra weeks to bloom.

One thing keep in mind: shrubs are easier to force than trees.

Here's a great article about the best choices for forcing branches by the time of year from Fine Gardening.

If you don't have any flowering bushes ask a family member, friend, or neighbor. They probably won't mind, and it only takes 2 or 3 branches to make a pretty statement.

Enough to carry you through the next few weeks.

If your branches are quite large you may want to use a bottle vase with a narrow neck to keep them from tipping over.