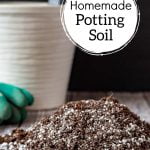 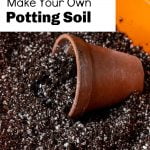 Learn about making your own homemade potting soil. This simple recipe is something that has worked for me for years and is easily attainable for anyone who wants to grow houseplants.

I've been growing houseplants since I was a little girl. Over the years I have grown and killed many plants. One thing that I have learned is that most of the time plants that didn't do well resulted from a water issue. Sometimes it wasn't even the amount of water that I used but the potting medium was holding on to too much water.

Too Much Water Kills Plants

Sure, you can lift the pot to see if it is lighter or stick your finger into the pot to check for dryness. Believe me, I've done both. I've even invested in a water meter. In the long run, the best method of keeping my plants stay healthy is to ensure fast drainage.

Repotting and Transplanting into New Soil

This is most important when you need to repot or transplant cuttings into a new pot. Typically I do not have a problem with houseplants from the nursery. They tend to be planted in a nice bark-like well draining mix. In fact, I will often keep my plants in the original pot as long as possible.

The one exception is the sponge-like substance that poinsettias are grown in lately. I'm not sure what it is and I've only noticed it the last two years but I find them hard to keep alive.

It's very simple. The best and most inexpensive way to get well-draining soil for your houseplants is to combine a good potting mix with perlite. That's about it.

Perlite can be found at just about any hardware, big-box store, or nursery and it's super cheap. The one concern about working with perlite is that it's very dusty. So make sure you get it wet to cut down on the dust and consider wearing a mask.

I'm old school and prefer a nice soilless mix without all the extra added stuff like fertilizers etc. However, that's just about impossible to purchase today, so I look for an inexpensive one that's made for indoor plants and go from there. One thing I do steer away from is the potting soil that has added water-absorbing crystals or particles.

When combining potting soil and perlite I use a 3:1 ratio or a 3:2 ratio for succulents and other plants that really like a dry environment.

Make sure that you always use a pot with a drainage hole. Making a homemade potting soil and using it in a pot without a hole is a waste.

Also, it's a good idea to leave a little room at the top of the pot for watering. This way the soil will not come splashing out when you water. This aloe was potted with a 3:2 ratio of potting soil to perlite to keep it extra dry.

Some people do not like the look of perlite. You could use something like this Pine Bark Fines. However, it is much more expensive and the pine is acidic. Still, if you like the look you could just top-dress the pot with it or pretty gravel.

Here's a Rabbit's Foot Fern that was out growing it's pot. I used the 3:1 mix for this plant because ferns like a little extra moisture.

The pot I used was only a little larger and that seems to work best for repotting. If you move to too large of a pot there will be too much extra soil. Even with a well draining soil, the roots will not be able to utilize the water causing soggy soil and possible root rot.

The simple addition of perlite to basic indoor potting mix is an easy, inexpensive way to treat your houseplants to a welcome environment that they can thrive in. 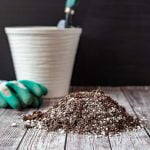 Learn about making your own homemade potting soil. This simple recipe is something that has worked for me for years and is easily attainable for anyone who wants to grow houseplants.
Prep Time5 mins
Active Time5 mins
Total Time10 mins
Course: Indoor Gardening
Author: Patti Estep
Cost: $10

You can use anything to scoop out the soil and portion it with the perlite. I often use an empty clay pot or nursery pot.