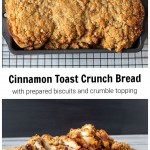 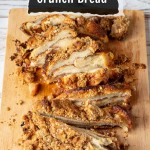 Semi-homemade with refrigerator biscuits this cinnamon toast crunch bread is a great breakfast treat or sweet snack to serve guests and family.

I wanted to make something sweet and special for breakfast during the holidays. Typically I don't eat breakfast. However, a holiday quiche or something like a berry buckle is often a nice option during the Christmas holidays. This year I decided to go with a cinnamon toast crunch idea using packaged biscuits and my favorite crumble topping.

If you've heard of monkey bread then this technique should be familiar to you. You start by taking prepared refrigerator biscuits and dip them in melted butter followed by a cinnamon-sugar mix.

The biscuits are layered in a loaf pan or sometimes people use a bundt pan. I used buttermilk biscuits however you could make your own biscuit dough or use a different type of refrigerated biscuit dough. I really don't think that it will matter too much.

The "crunch" comes in with a topping made of oats, more cinnamon, brown sugar, and flour. This is added to the top of the biscuits for added flavor and texture.

Note: Using two packages of canned biscuit dough took much longer to bake than I expected and the resulting bread was a little on the doughy side. I would consider using only one package in the future. Or make this in two pans. You might need to double the crumb topping. Don't worry. It was still delicious!

The resulting bread is over-flowing with lots of cinnamon and sugar and the crunchy crumble topping made it pop.

Here it is sliced up for everyone to enjoy with a nice cup of coffee and tea. A perfect holiday pastry or treat for any guest or family member. 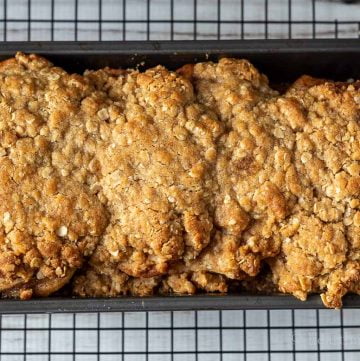