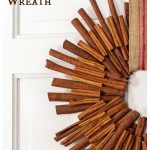 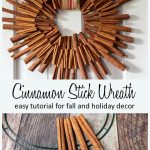 See how you can make this cozy and fragrant cinnamon stick wreath in no time. Great for your fall decor and pretty enough to be left up throughout the winter.

The obvious great thing about working with cinnamon sticks is that you get to smell their wonderful aroma as you work. In the past, I made a spice wreath with several spices and one of my more popular posts is a dried orange garland with cinnamon sticks and bay leaves. The fragrance doesn't last forever but even then you are left with a beautiful bit of home decor.

How to Make a Cinnamon Stick Wreath

Start by gluing the long cinnamon sticks onto the wire base at about the halfway point attaching to the wire wreath frame on each stick. Since you want to lay them flat, there will be space in between the sticks.

Continue adding cinnamon sticks until you fill as much of the wire base as possible.

Next use a ribbon to hang the wreath. You can use some thumbtacks or other small nail tacks to attach the ribbon to the top of the door. Then trim off the excess.

For this wreath, I used a piece of burlap ribbon. To give the ribbon some dimension, I painted a few stripes of red paint down the center with the middle a little thicker than the sides. This reminded me of vintage ticking stripes and I thought it looked great with the wreath.

Here it is in all its glory. Originally I thought this would be great for the fall and maybe even for Christmas. However, I've had it hanging in my kitchen for a while now, and I think I just might leave it there all year long. 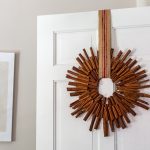