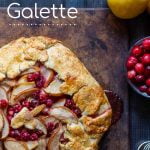 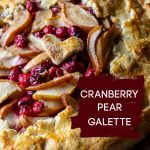 This rustic fresh cranberry pear galette is a beautiful fall dessert, with an easy rustic foolproof crust that anyone can make.

When fresh cranberries make it to the stores and I can't wait to make something with them. This one is a rustic cranberry pear galette because both are in season and when you make a galette the crust is very forgiving and it also shows off the beautiful filling.

Fresh cranberries work well in baking an often you don't need to add extra sugar. For example, I've used them in a cranberry shortbread cookie when many are using dried cranberries with added sugar. However, the fresh cranberries look better and taste just as great.

I chose to make a galette instead of a pie for a couple of reasons. For one, You need less crust for a galette, unless you are making a bottom only pie. Also, you don't have to worry about lifting the crust into a pie pan and working with the edges in some kind of fancy crimping style. You simply just fold it over some of the filling. The last reason I like to make a galette is that the beautiful fruit filling shows in the middle making a gorgeous looking dessert.

This is a dessert however, less pie crust means fewer calories, and using fresh cranberries instead of sugar-laden dried cranberries helps too.

Also, like any pie type dessert, I did add some sugar to make the fruit filling but no cornstarch, or other ingredients. I also left the skin on the pears. It added a nice color and since they were fresh the skin was thin and tasty.

A little egg wash made with one egg and a teaspoon of cream made this crust golden brown. I also added a sprinkle of sugar on top for added sparkle.

TIP: One reader asked what she could substitute for the cranberries. I suggested raspberries. However, she had frozen rhubarb on hand so she tried it. She used it in its raw form in 1/2 inch pieces and said it turned out great.

The final touch was a small heart made from some of the dough, placed in the center of the pie.

Just in time for all your holiday projects.