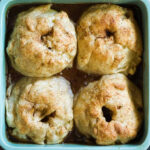 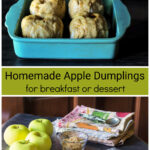 This apple dumpling recipe is pretty easy to put together and makes a stunning, extra-special dish, to impress your guests. Using apples fresh from the orchard in the fall or really any time of year, this recipe works well as a fancy breakfast or brunch item or as a dessert. You can serve it with milk, cream, or ice cream for more deliciousness.

Another item introduced to me by my husband was a Pennsylvania Dutch apple dumpling. When visiting his family in central PA, near Amish country we picked up some chicken pot pie and a few apple dumplings, in the fabulous market in the center of town. He would heat the dumpling, and add milk, to eat any time of day, mostly breakfast.

Recently tried my hand at making my own homemade apple dumplings, and am sharing the recipe here today.

I went to our local farm and checked out the apple selection. I figured an apple dumpling is pretty similar to a pie, so I was looking for a good pie apple.

Many say that Granny Smith apples are the best apples for pies, but they didn't have any of them at the farm. I ended up with one they called Ginger Gold, because I haven't tried it before, and it was labeled as good for use in pies. Personally, any crisp apple that's firm and tart has my approval. Honeycrisp, Braeburn, or Pink Lady are good choices.

I made my standard pie crust dough for the pastry. It tasted great, but I noticed it wasn't as dry as the ones I'd had before. I think that's why my husband likes to pour milk over his apple dumplings.

This recipe includes a syrup made from brown sugar, water, vanilla, butter, and cinnamon to pour over the apples. I think this makes them extra delicious, but you could cut back here too.

Possibly consider just a sprinkle of cinnamon sugar. Make your own cinnamon sugar by whisking together regular granulated sugar with cinnamon. I'd start with a 4:1 ratio. Four tablespoons of sugar to one tablespoon of cinnamon and then go from there as you wish.

Either way, I think you will be in for a fabulous treat. 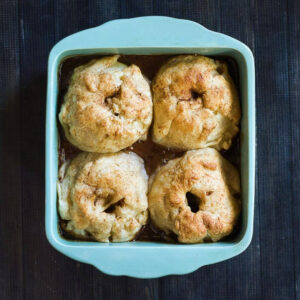 Serve as a dessert with a scoop of vanilla ice cream. Keep leftovers in the refrigerator in an airtight container for a few days. In the morning, heat one in the microwave and pour some milk over top for a delicious breakfast.