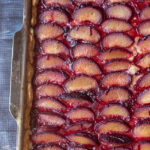 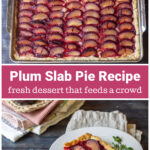 This tasty plum slab pie recipe is made in a large rectangular pan for a rustic look with plenty of filling. Perfect for serving a crowd.

I really liked the idea of the "slab pies" I've been noticing online. The concept of pie, where the ratio of crust to filling is a little more equal, sounded like a fabulous idea.

So I tried making a spiced plum pie in a large sheet pan to take to a party, and though I'm not sure if it was more of a tart than a pie, the result was delicious.

I've given you my version of Pate Brisee below as part of the recipe for the crust, but you can use any pie crust you want, even store-bought. Also in this recipe, I used cherry preserves, but you can use any flavor that you like. In fact, you could probably get away with jelly.

Plums are especially good in the late summer, but it seems like they are available in the grocery store practically year-round.  Of course, you could try it with other fruits such as peaches or blueberries.

I really like the rustic look of this slab pie. Beautiful dark red and purple hues of the plums all shiny with glaze and a tasty flaky crust.

The best part is the number of servings you get when making a pie in a sheet pan.

Also, your guests can feel good about having a little slice, and possibly adding a scoop of ice cream, because a slice of this pie is not nearly as much as a typical round pie.

However, it tastes just as sweet.

This crust part of the recipe is enough for 2 regular pie crusts. I use both for this large sheet pan.