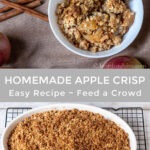 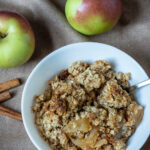 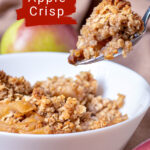 This apple crisp recipe with oats is a delicious large dessert that's easy to make and one that you can create all year long.

Fruit crisps are one of my favorite desserts to make. Especially apple which reminds me of my mother's Dutch Apple Pie without the crust. After all the crisp topping is the best part.

A crisp is usually a fruit dessert with a crispy topping that contains oats. A crumble is very similar but the topping doesn't usually have oats in it, although I admit that I often do. And, a cobbler is a dessert that has dollops of dough or biscuits on top of the fruit.

I had a lot of leftover apples from my fall tablescape post so I decided to make an apple crisp with them. These are MacIntosh apples (above). I love their colorful skin. I think I threw a couple of Honeycrisp in too. However, some people say Macintosh apples are not the best for pies. I say just about any apple works well in an apple crisp. Besides Macintosh apples are more of an all-purpose apple. You can use them for any baking, eating, or juicing recipe. Granny smith apples are another good one to try and I like the fact that you can usually find them in the grocery store all year round.

Once you get through the hard part of peeling and dicing the apples toss in some fresh lemon juice and sprinkle on some ground cinnamon. No need for any additional sugar or thickeners.

Spread the apples evenly in a nice baking dish.

Mix up the delicious crumb topping, a combination of butter, flour, brown sugar, oats, cinnamon, and salt. Mound the topping all over the apples, starting in the middle and carefully spreading to the edges.

TIP: This is a good candidate for setting on a baking sheet just in case the apple juices spill over the sides.

Can You Freeze Apple Crisp?

Yes, pack it into a good freezer container and wrap plastic on top before closing the lid. Remove from the freezer and allow it to thaw on the counter, or in the refrigerator. Reheat in the oven and enjoy.

It's a lot of apples to peel and chop but then you can serve at least 10 or more people with this yummy dish. Or feel free to cut it in half for a smaller crowd.

Now I know most people just have to have pumpkin pie during the holidays but wouldn't it be nice to offer this delicious apple crisp too? Serve it alone, with whipped cream, or a scoop of vanilla ice cream. Oh so good.

Serve warm with vanilla ice cream. Combos - Berry mix, Apple & Cranberry Tastes great anytime. breakfast, snacks, dessert. Check the crisp around 45 minutes to see if the top is getting too brown. If so, cover with foil for the remaining time.