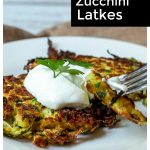 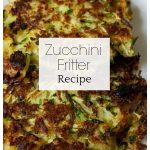 Here's an easy and tasty way to use up your garden bounty. Make zucchini latkes for a great side dish, appetizer, or light meal.

When my brother-in-law gives me zucchini I like to use it up in all kinds of ways. Recently I made a chocolate zucchini bread with it and if the zucchini is small and I have several I love to make Kusa, a stuffed zucchini recipe with Middle Eastern flavors.

This time I'm making a latke or zucchini pancake. It's similar to a potato pancake or potato lakes, however, this one is made without potatoes.

It starts with grated zucchini. You can use your food processor or a basic box grater. Then try and remove some of the extra water with paper or kitchen towels first.

Next, you need something to bind the zucchini together. I'm using an egg, breadcrumbs, and cheese. A few added spices amp up the flavor.

Because I always have it on hand I used olive oil to fry the pancakes but any vegetable oil would work well. In fact, many vegetable oils have a higher smoke point than olive oil so they may be a better choice.

I served these zucchini latkes with sour cream as a side dish. This recipe could easily be doubled to make several smaller latkes to serve as an appetizer or party treat. In addition to sour cream, you may want to try other ways to top latkes. A tasty way to use all that garden fresh zucchini. 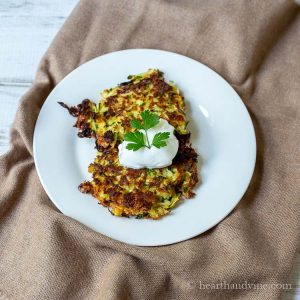