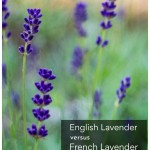 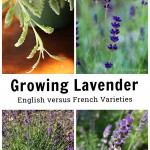 Learn a little about the differences between French Lavender vs English lavender including a few of my favorite varieties. They are all fragrant and beautiful but when it comes to growing them, there are several differences.

I was recently fortunate enough to receive a gorgeous French lavender plant from my sister-in-law. It smells great and looks even better. As a tender perennial it has a plant hardiness to zone 8. This means that it can only grow outdoors in warmer climates so I will need to keep it as a houseplant. However, I can still move it outside during the summer season.

French lavender has the scientific name Lavandula dentata where dentata translates to "toothed" referring to the scallops on the leaves as shown above. It's sometimes confused with Spanish lavender or Lavandula stoechas.

Spanish lavender has showier flowers than French lavender and their leaves are not scalloped but straight like English lavender. Sometimes you will see it referred to as Rabbit Ears due to the shape of the flower petals.

Neither French nor Spanish lavender is used much today in perfume and cosmetics but they are valued more for their ornamental use. Also, as I mentioned, both French and Spanish types of lavender prefer warm climates and are only hardy outside in Zone 8. For those of us living in cooler regions, that means that you will want to keep yours in a pot and bring it indoors during the cold winter season.

If you live in the north, you may want to plant English lavender or Lavandula angustifolia. I have grown several plants over the years and it is one of the toughest plants in the garden.

Munstead, named after Munstead Woods in England, the home of famous gardener Gertrude Jeckyl, is hardy to zone 5. It has a great mounding shape and gets about roughly 1.5 feet tall and wide in size. This lovely plant is also drought tolerant and deer resistant.

In addition, bees love it, it works great as a cut flower, can be dried for use in many crafts, and is even used in cooking.

Munstead's cousin, Hidcote is pretty much the same except that it is slightly smaller and the flowers are much deeper purple in color.

Here is some Hidcote lavender that I dried.

Note: if you want to dry your lavender make sure you pick the flowers in bud form. If you wait too long it will flower like the pic above and will not dry well.

My newest type of lavender is called Sweet Romance® from Proven Winners. Its scientific name is Lavandula angustifolia 'KERLAVANGEM'. I have three of these plants in my full sun garden at the end of the driveway. They have grown so well and as you can see they have a nice compact size and the blooms are very abundant and vibrant.

The important thing to remember about English lavender is that they like well-drained soil. Most can take cool temps but not soggy feet so make sure you plant them accordingly. To help them even further make sure to prune them early in the season by thinning out the middle. This will allow for plenty of airflow to keep the plants dry.

Lavandin or Lavandula intermedia is actually a hybrid between Lavandula angustifolia and Lavendula latifolia aka spike lavender. You may have seen beautiful tall 'Provence' or the popular 'Grosso' varieties of lavender plants in the nursery. This type of Lavender is often used in the perfume industry however they have more camphor oil making their scent a little sharper than "true lavender," English lavender.

Bottom line; whether it's English or French, lavenders are wonderful plants, and everyone should be growing them.